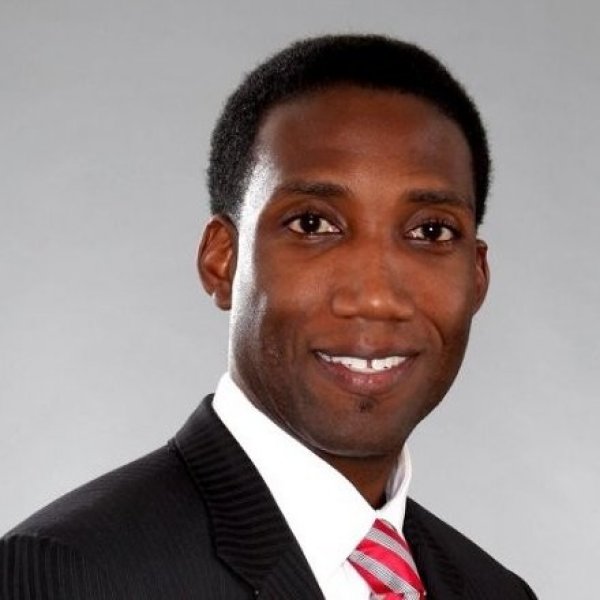 Rowan Barrett is the Executive Vice President and General Manager of the National Men’s Team at Canada Basketball, after almost two decades as one of the best international professional Canadian basketball players ever.

From 1991 to 2008, he represented Canada internationally on 6 continents (North America, South America, Europe, Australia, Asia, and Africa). He was also part of the Veteran training camps for the Toronto Raptors from 1997 to 1998 and Philadelphia 76ers in 1999 and achieved a slew of notable athletic and community awards, including the Planet Africa Award for Sports.

Considered an athlete extraordinaire by his peers and fans, Rowan is a member of the prestigious Century Club as one of the longest-standing Canada basketball players, historically registering 115 games competing for Canada.

One of the most memorable moments in his career was as the captain of the 2000 Canadian Olympic Men's Basketball team in Sydney, Australia. Also, in 2001, he was chosen to accompany former Prime Minister Jean Chrétien to Russia in Canada’s bid to host the 2008 Olympic Games.

As a captain for Canada who was received many awards of excellence all over the world, Rowan Barrett inspired a generation of talented basketball players to dream for the national team, many of who went on to demonstrate commitment and brilliance as Canadian basketball players.

After competing with past and current NBA icons on and off the court, Rowan continued making extraordinary contributions towards the promotion, development, and advancement of basketball in Canada. He was engaged to provide pre-and post-game analysis and commentaries for Raptor TV, Global TV, CBC, and the Score, joining forces with other Canadian Olympians to promote Olympic events in schools and communities across the GTA.

Backed by an MBA degree and years of corporate experience in law, finance, entertainment, renewable energy and sports, Rowan has gained experience in the for profit and non-profit sectors. His experieinces across North America, include companies such as Maple Leaf Sports and Entertainment and the Royal Bank of Canada and in 2010 Rowan brought his extensive global athlete and corporate experiences to bear, accepting the role of Director of Youth Development with Canada Basketball. Within 2 years, he was promoted through the ranks to manage the Canada Basketball’s youth teams and won Canada’s first World Championship at the 2017 U19 World Cup. Rowan continued to excel becoming the Assistant General Manager & now the General Manager of the Senior Men’s National Team since 2019.

Barrett is responsible for further developing several aspects of the Senior Men’s National Team program including founding the Junior Academy Program, the Tall Player Program and making advancements in analytics, style of play, strategy, and team personnel. He also made innovations to the Canada Basketball Men’s High-Performance Podium Pathway and led the creation of the Gold Medal Profile, which outlines top global standards of system development and performance metrics.

Rowan has discreetly supported communoity programs across the GTA and charities across the globe. He is a man of faith and is also a devoted husband and father, to wife Kesha and his two sons Rowan Jr and Nathan.

Meet Rowan at the US College Expo.